Architectural Photography: Is There a Case for Collaboration?

It seemed to me that everyone had their own methods, their own voices, and their own formulas for the capture and delivery of architectural images. Moreover, it seemed that most architectural photographers were guarded, unwilling to share what might be construed as trade secrets, out of a fear that someone might develop a competitive advantage. I may have been wrong, but they say perception is reality.

This all changed in 2010, as I met Christian Korab, and as the two of us with four other local photographers - three of them his students - began meeting and working together. Initially there were the six of us - Tom Dolan, artist and photographer; Pete VonDeLinde, Elliot Stevenson, and Marc Ofsthun, students of architecture and photography; Christian and me. Later, Rob McIntosh, photographer and web designer, joined us. The group, except for Rob is seen here in Christian’s studio. 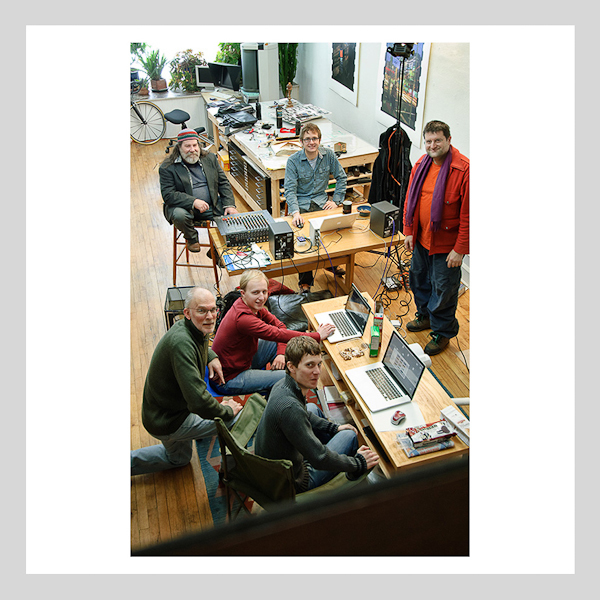 At first we met monthly, whenever we could get the group together. The more we met, the more we realized that monthly meetings simply weren’t enough - so much to do, so little time. Eventually we came to meet weekly, using Christian’s studio in South Minneapolis as a base of operations.

For lack of a better handle, we began referring to ourselves as a Photo CoOp, or Collective. This evolved in time to the name IDE[A] - Imaging the Designed Environment Architecture - a moniker later dropped for a variety of personal reasons.

Our mission, as we came to see it, and as I would articulate it, was threefold, in the following order of priority:

1.) To provide opportunities for growth among collaborating members through regular and ongoing educational programs, roundtables and workshops;

2.) To find new and innovative ways to serve our client base through research & development;

3.) To “shoot for hire” - to provide the highest quality professional imaging services for the design and construction community - our client base - with a solid foundation in shared resources, skills and experience.

We treated every initiative as an opportunity for teaching and learning. The benefits of experience were shared downwards from our older members to the younger, but every bit as importantly, the savvy of the younger members was shared upwards to the older among us.

Often we brought a crew of six to our photo shoots, when a crew of two would have sufficed. We conducted a number of lighting workshops on location. Following is an image we shot collectively for a residential interior designer. 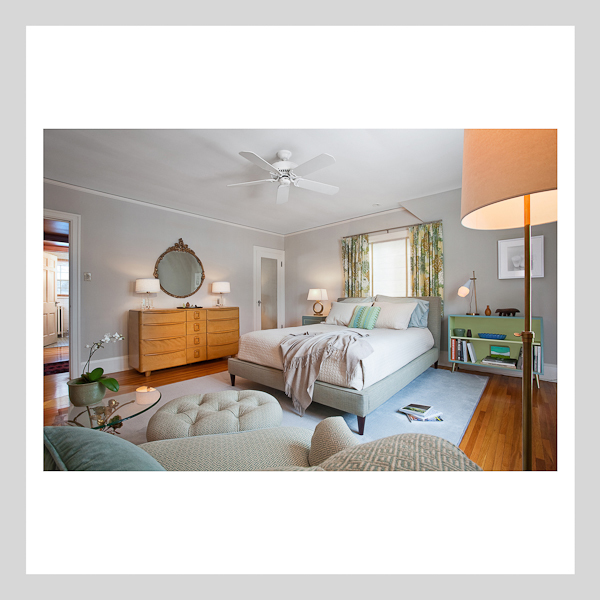 The lighting setup is shown, in part, in this iPhone shot taken during the session. 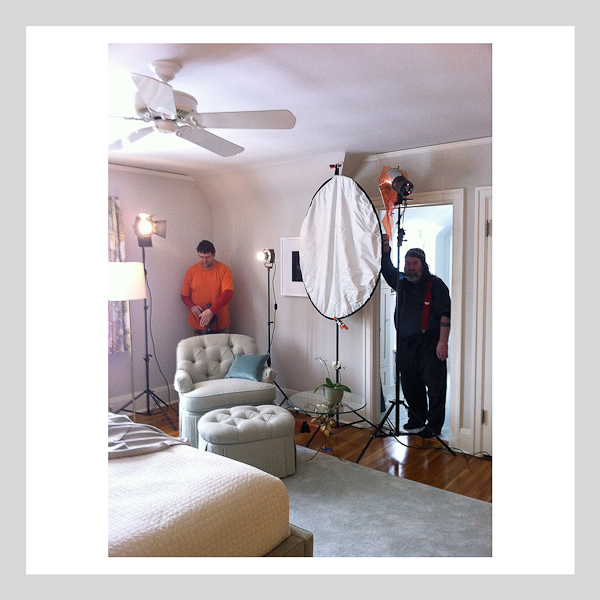 Here, Christian is handling the camera, and Tom the lights, which included both strobe (daylight) and quartz (tungsten) light sources. Note the orange gel on the strobe to balance the lighting color temperatures.

The following two images represent our work at a 4" x 5" view camera workshop, conducted on location at the recently completed University of Minnesota Science Teaching and Student Services building - an iconic structure, designed by Kohn, Pedersen, Fox with HGA, located opposite the Weisman Art Museum at the gateway to the east-bank campus. 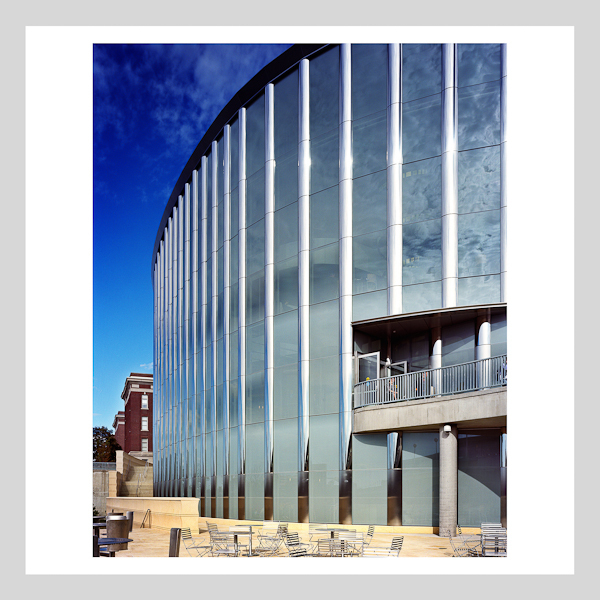 Elliot Stevenson and I shot this exterior view on my camera, using a 120mm Schneider Super Angulon Lens. 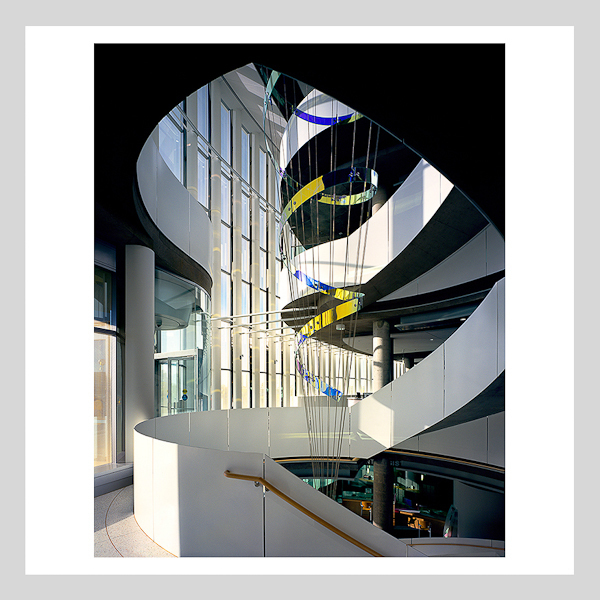 Pete VonDeLinde and Christian Korab shot this interior view on Christian’s camera. I believe they used a 65mm Super Angulon. Both images are high resolution scans from one of Christian’s two active Heidelberg drum scanners. Both images were mastered non-destructively in Photoshop from the RAW scans in subsequent post-production workshops.

As a part of our educational mission, we also conducted a number of roundtable discussions. The following image was taken at a session at Christian’s studio on Wednesday, February 2, 2011. Discussion centered on the work of Balthazar Korab Ltd., trends in the marketplace, effects of the economic downturn, and Architecture Minnesota magazine’s website initiatives. 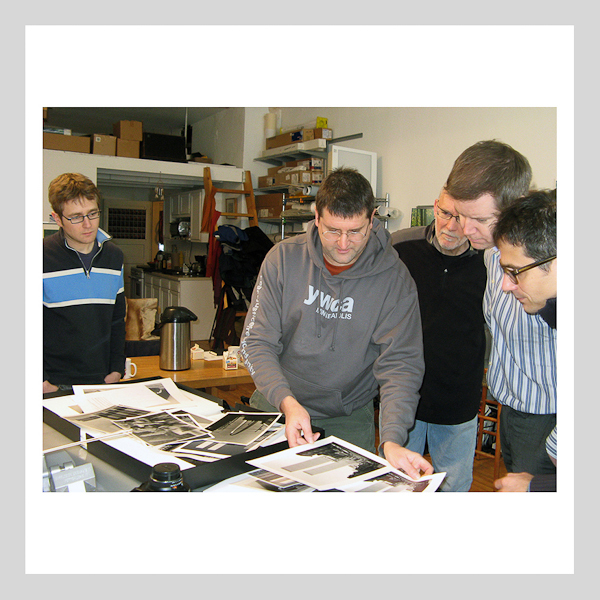 Early in our collaboration we began to study the application of film-making to architectural imaging. Pete VonDeLinde had found and we had become taken with Alex Roman’s short-film, “The Third and the Seventh” - http://vimeo.com/7809605. And so, film-making with high definition video capable DSLR cameras became the central part of our Research and Development mission. We won an Honorable Mention for our submittal in Architecture Minnesota’s Videotect1 program, and we went on to shoot a number of short-films and Videotect promo pieces that soon appeared on Architecture Minnesota’s new website.

The culmination of our film-making initiatives was a four and one-half minute piece showcasing HGA’s award winning Lakewood Garden Mausoleum. The film can be seen here - Play it full screen:

This effort, the tangible results, and the educational merits of this project - alone - all make a strong case for collaboration. Though any of us individually could have produced a capable work on this subject, I believe that it was the synergy across our collaboration that elevated this project to a level beyond the limited individual experience we each brought to this project.

We became more or less dormant as a group, and dropped the name IDE[A] after this film - as much a break to re-examine our individual agendas, as to rest and regroup. Even so, this collaborative has legs and continues to grow and evolve. Look for more from the individuals - old and new - and from the collaborative going forward.

Most of my architectural photography in recent years has been done in color by direct digital capture. I’d attribute this to almost universal demand in the marketplace, dating first to the time when color film came to use, and reinforced... Continue →