My wife, Kathi, and I subscribe to the New York Times - not the online version, but the hard copy which is delivered to our doorstep every Sunday Morning. I frame this as “our” subscription for reasons which will become clear later in this post. You may wonder what this has to do with architectural photography - read on.

As a rule, Kathi starts with the “Sunday Styles” section of the Sunday Times, and then she moves on to the “Book Review” and other sections of the paper. I start with the front page and then gravitate to the “Sunday Review” section, which I generally read cover to cover. Often I stretch the “Sunday Review” over the course of an entire week, savoring every bit of it.

Today (Friday - late in the current week), I read an article titled: “The End of ‘Genius’”. I overlooked it at first and nearly missed it! Thankfully I was scrounging around for some reading over breakfast, and read this, having consumed everything else in the Review, earlier in the week.

This article speaks to creativity, and dispels the notion of solo “genius”. It attributes the “romantic genius”, often associated with the likes of Shakespeare, Freud, Martin Luther King, Monet, Renoir, Picasso, Einstein, Lennon, McCartney and others, as actually rooted in collaboration by all realistic accounts.

This article spoke to me, and reinforced all of my feelings about the value of collaboration - much of which I related in a previous post, titled: “Architectural Photography: Is There a Case for Collaboration?” http://peterjsieger.svbtle.com/architectural-photography-is-there-a-case-for-collaboration.

What really surprised me though was the notion, suggested later in the article, that the highest and best forms of collaboration occur in individuals working together in pairs - Kathi and me on an interpersonal level; Lennon and McCartney in their music.

I also think immediately of Joan Soranno and John Cook, the two Minneapolis architects who where the collective genius behind HGA’s award winning Lakewood Garden Mausoleum, and for whom a personal collaboration of architectural photographers produced a four and one-half minute short film showcasing the architecture. The short film follows.

Make no mistake about it, Soranno and Cook worked with scores of others - architects, engineers, designers, technicians, drafters, builders, managers, administrators and others (see film credits for a short-list) - but it was their collaboration as a pair - husband and wife, no less - that was behind the execution and delivery of this master work.

On a personal level, in my own working experience, I also think of Christian Korab and Pete VonDeLinde, two of the six collaborators in the making of the Lakewood Garden Mausoleum short film.

Though Pete and Christian always worked closely with the other four of us (and from time to time, five of us), I’ve observed that they also worked exceedingly well as a pair of collaborators, a subset of the larger group. They have a certain working chemistry that played well into the making of the Mausoleum short film, and other works undertaken within the framework of our collaboration. Following is an image, shot at the University of Minnesota Science Teaching and Student Services Building - one that the two of them produced together at a workshop on 4" x 5" large format photography. This, among other examples of their work, attests to the excellence that comes from their unique working relationship. 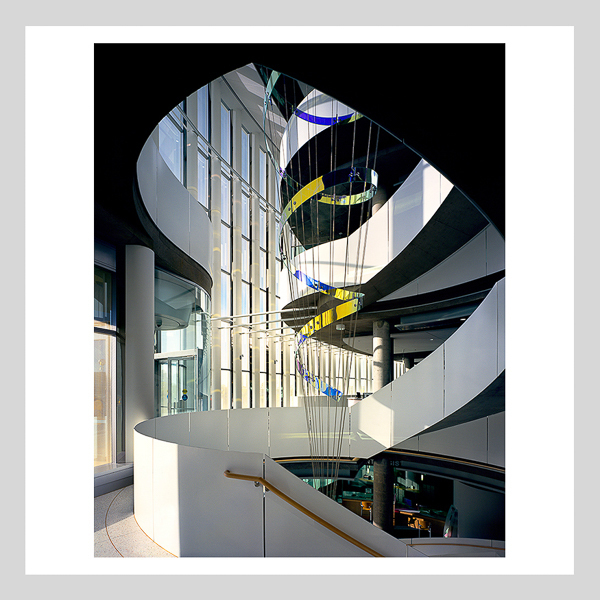 I’ve personally worked closely with Tom Dolan, not only in the context of our larger group, but before that collaboration, as well. Tom introduced me to the notion of the muse, also mentioned in the Times article. I was never sure how the muse actually manifests itself, but I’m sure it is real. Imagine an artist without a muse, or an architect (or architectural photographer) without a client. Surely there are no solo efforts; there is no solo genius.

I, for one, am a much better architectural photographer owing to the collective benefits of collaboration, and my working relationships with Pete VonDeLinde, Marc Ofsthun, Elliot Stevenson, Rob McIntosh, Tom Dolan and Christian Korab.

My last post was a case study about a Minneapolis Loft, and the challenges faced both on location, and in post-production. In that post, among other things, I described some of the image modifications requested by my client. Since that... Continue →