My last post was a case study about a Minneapolis Loft, and the challenges faced both on location, and in post-production. In that post, among other things, I described some of the image modifications requested by my client. Since that post, I’ve read a couple of articles on this subject, and my awareness has been heightened, as my outlook continues to evolve.

This article describes how an award submittal, which included a significantly altered architectural image, may have created unfair advantage for the award recipient. Since there was simply insufficient time for the jurors to visit each and every project submitted, the jurors needed to rely on the photography to shape their judgements. This is a circumstance common to most architectural awards programs, and of course, it raises an ethics question about how a built project is represented through architectural photography.

David’s post was, in part, a response to the dilemma posed by the Chicago Tribune Article, but also described his personal approach to photographing architecture and design. In this post, David makes a strong and eloquent case favoring design interpretation through skillfully applied architectural photography rather than purely unemotional design documentation. This is an approach I fully support, and have always personally favored.

In my own experience, as of late, I have observed increasing client demand for image manipulation – most of it simply an added burden in post-production. The question for me, and for other architectural photographers, is where “to draw the line” – often a difficult question. Following are several personal examples of what I’m seeing.

The first set of images below represents a few of the “adjustments” that comprised the first significant request for digital image manipulation that I have encountered in recent experience. Most of the modifications where cosmetic in nature – a tangle of cords removed beneath a desk, a video projector removed from the ceiling of a conference space, or a human figure inserted in an image for scale and vitality. 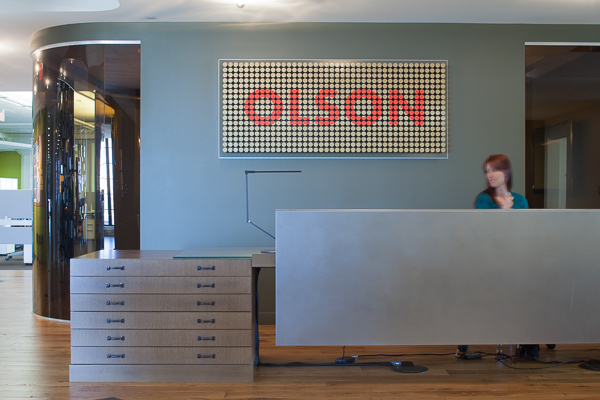 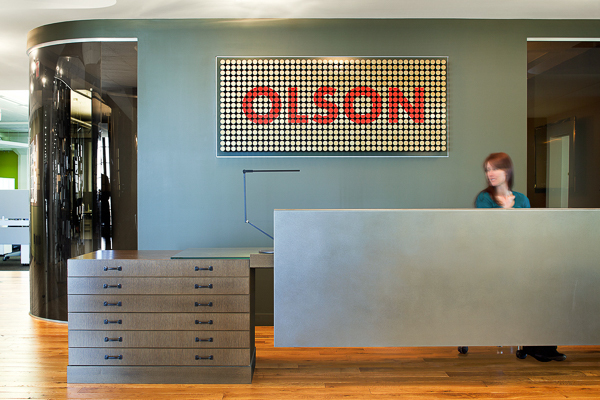 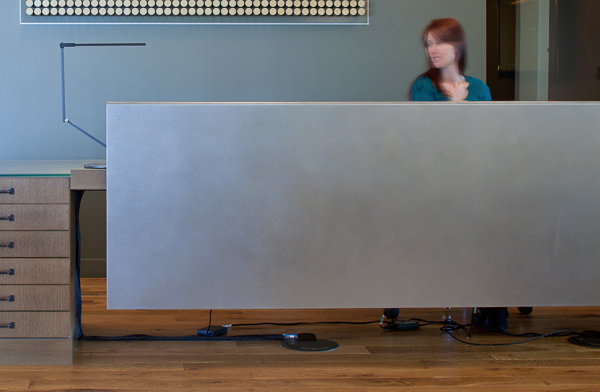 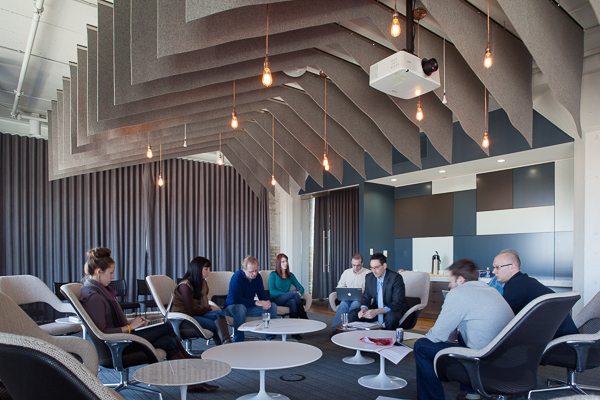 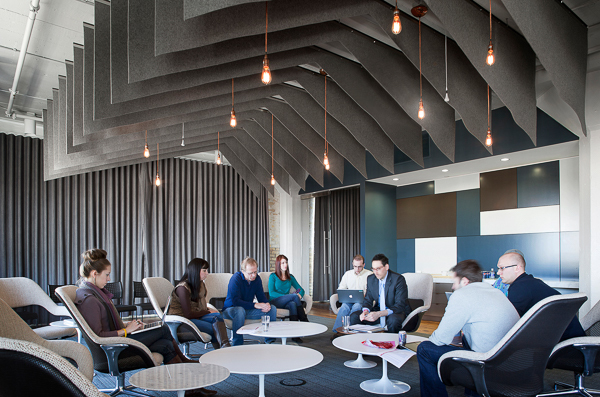 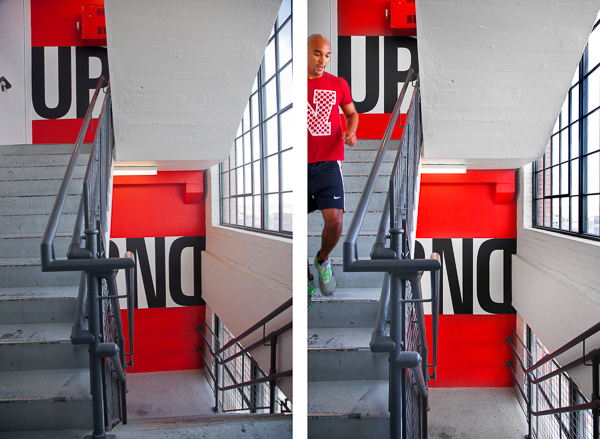 In my experience, many of the requests for image modification are driven by the appearance of utilities or mechanical equipment which cannot be avoided when photographing a project. The following example is curious and unique in that it involves removal of utilities from adjoining properties, rather than from the subject project. 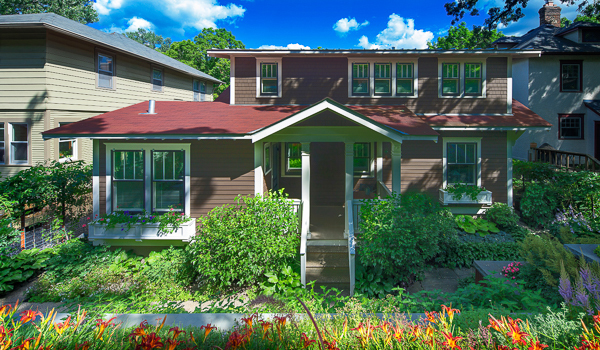 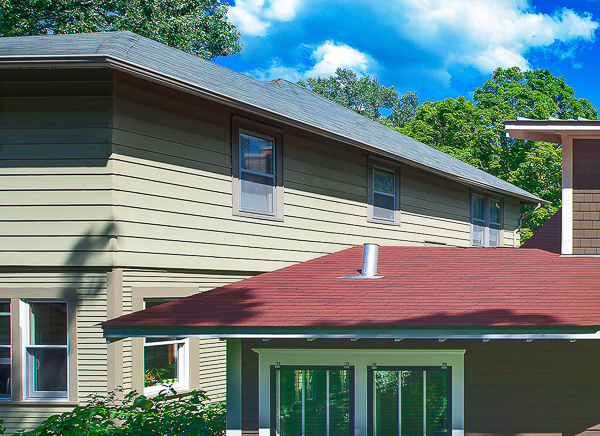 The two images below represent a residential project I shot in early March 2015. The architect needed the photography quickly for unstated purposes, and could not wait for a spring snow melt at the time. Since the primary facade was north facing, I suggested that a twilight shot would best serve, considering lighting. And of course, the answer to the concern about the unsightly remnants of soiled snow was to remove it in post-production.

However, the “retouches” did not end there, and included the following: 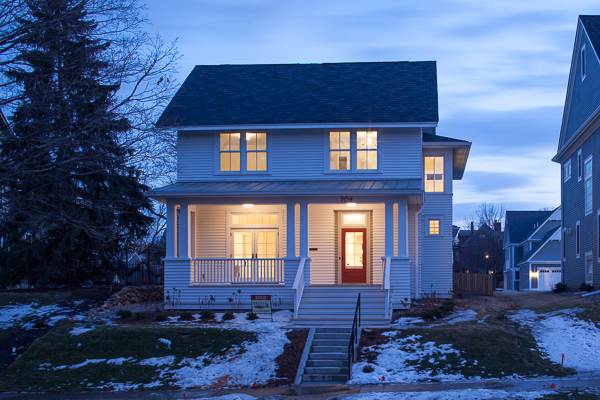 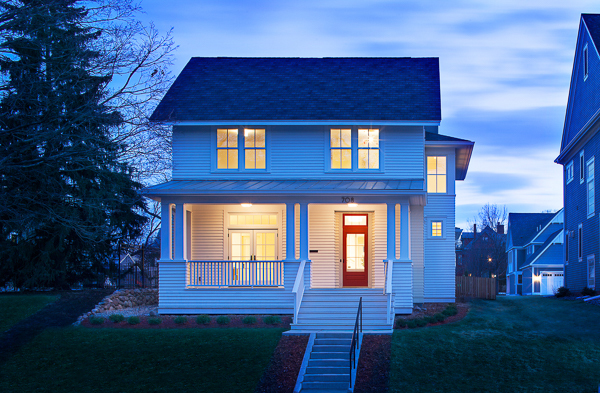 Not shown here in the finished image is yet a further modification which involved removal of the bare tree branches between the house and the large evergreen tree – this, in the words of the architect, to “give the house a little more breathing room”. I made that modification on the image submitted, but my personal inclination is toward the finished image shown here. I’m at once ashamed and proud of the finished image – ashamed of the extent to which this image was altered, yet proud of the final results shown here. Clearly the image as shot, and as represented in the Camera RAW file, would be of no use to the architect.

Having said all this, and having responded to my client’s wishes in each of these circumstances, I must admit that I’m fully complicit in this practice of digitally sanitizing architectural images. However, I remain deeply conflicted, and feel the need to establish proper limits personally. Again, where does one draw the line?

All along I’ve been rationalizing the practice of digital image manipulation as simply representing the designer’s intentions – what the designer sees in his or her mind’s eye. But I think this goes too far. Upon some considerable reflection, I believe it’s more a question of how any given design responds to real world conditions – infrastructure, utilities, mechanical equipment, traffic – the kinds of things that a designer might tend to wish away regardless of his or her ability to deal with them within the constraints of the client’s will or budget.

So from the photographer’s standpoint: If through careful choice of camera position, lens selection, and lighting – selectivity and emphasis – a perceived design distraction can be eliminated or at least minimized, then, fair game. However, outright digital removal of distractions that haven’t been addressed by design, or by skillful camera work, should be considered off limits. So, in my mind, best practice is still editing in camera, as when film was commonly used.

Finally, in my last post, I made the statement that “the customer is always right”, which would suggest that “anything goes”. Let me retract that statement here. There is an exception for every rule. Architectural photographers as visual communicators and design interpreters must always exercise good judgement, even in the face of understandable client inclinations towards digitally enhancing their design representations. Unfortunately, it may never be quite that easy. What do you think?

Most of my architectural photography in recent years has been done in color by direct digital capture. I’d attribute this to almost universal demand in the marketplace, dating first to the time when color film came to use, and reinforced... Continue →