In recent posts, I’ve discussed the importance of “light” and “perspective” in architectural imaging. A third consideration, “point-of-view”, is every bit as important in the making of an architectural composition.

Point-of-view, of course, is a function of camera position relative to a scene, but also fundamental to point-of-view is the choice of lens, which will affect the coverage of the scene, and expansion or compression of perspective.

In addition to composition and perspective considerations, an understanding of the movement of light across the subject is critical to proper placement of the camera and timing of the image capture. This is especially true of exterior work, but also of interior work wherever daylighting is a part of the equation.

The following images shot in and near the elevator lobby at Valspar’s corporate headquarters in Minneapolis will serve to illustrate. This space - part of a 130,000 square foot project by MS&R (now MSR) - is located at the core of the building. Daylighting is not an issue. The space is completely symmetrical about a diagonal axis through the centerlines of the door openings at each end of the lobby. The following view through the door openings along the diagonal axis describes the setting for this discussion. 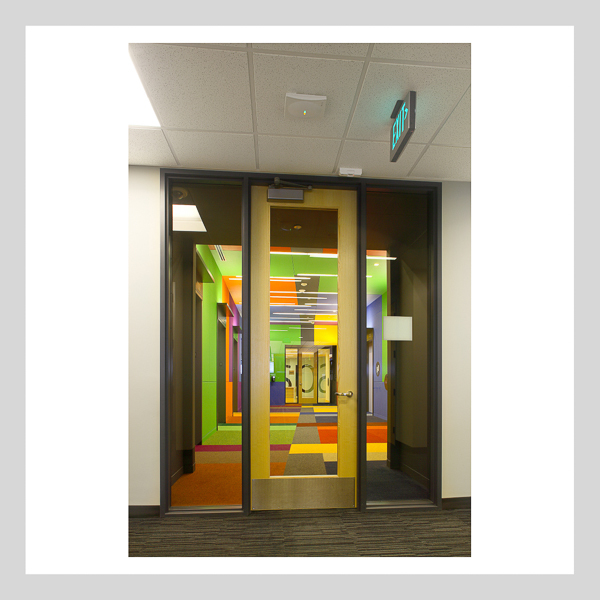 The shoot team for this project was sizable, including: the architectural photographer (me); Tom Dolan (assistant, friend and fellow photographer); MS&R’s marketing manager; and several of MS&R’s interior design team. It’s not at all uncommon for each member of the shoot team to have his or her own opinions about the view(s) to be captured, but in this case I took the lead and established the point-of-view based on the design essentials - space size and configuration, color, geometry and lighting.

This first capture within the space is a good representative view, quite adequately describing the design. It was shot with a 24mm (wide angle) tilt-shift lens, with a slight upward shift to show the pattern of color as it extends from the floor, up the walls, and over the ceiling. 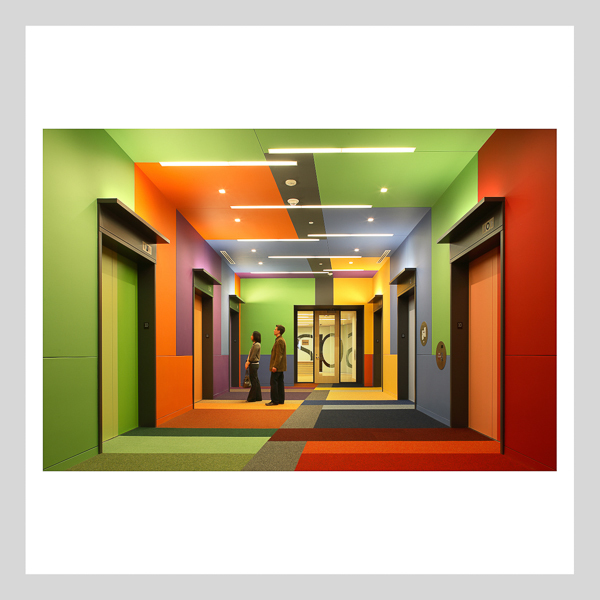 Note that the camera has been placed on the centerline of the space, off the diagonal axis; the composition is basically symmetrical - as is the space - the image frame is square up with the design geometry, and scale figures are carefully placed against a simple background.

So, back to point-of-view. The following two images, shot with the same lens (24mm TS-E), from approximately the same camera position, yield a completely different view of the space - both views subtly different, each having a strong rational for respective points-of-view. These are composite images, made up of two separate captures - a lens shift up, and a lens shift down - which yield a much more expansive overall view. They are also without people, and as such, focus solely on the nature of the interior architecture. 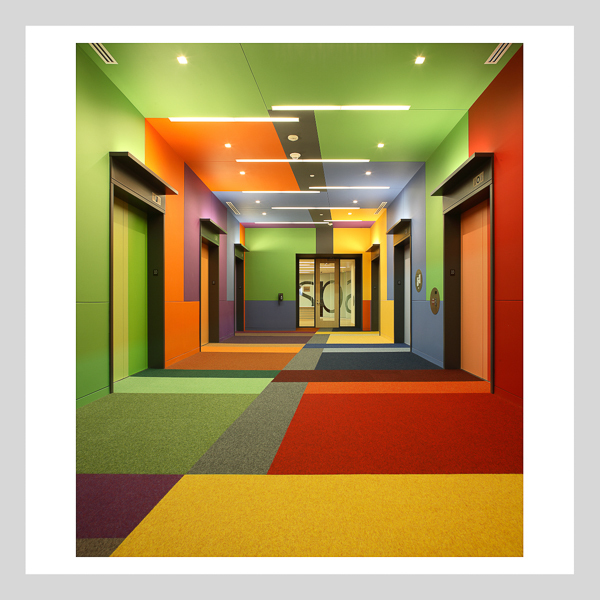 The view above - like the one immediately above it - is essentially a one-point perspective. I have a personal preference for viewing strongly orthogonal design in this fashion. 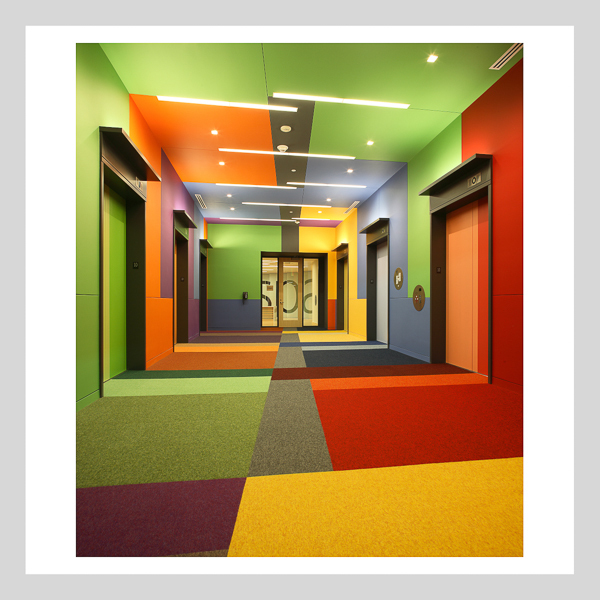 This two-point perspective results from a slight rotation and lateral shift of the camera position. Note, in this case the point-of-view is positioned along the diagonal axis - the stripe in the floor and ceiling - which visually connects the two doors at each end of the lobby. This view, I think, is equally compelling.

Toggle back and forth between the views in the animation below, to directly compare the differences.

Both compositions have their merits. I like the orthogonal view. Which view do you prefer?